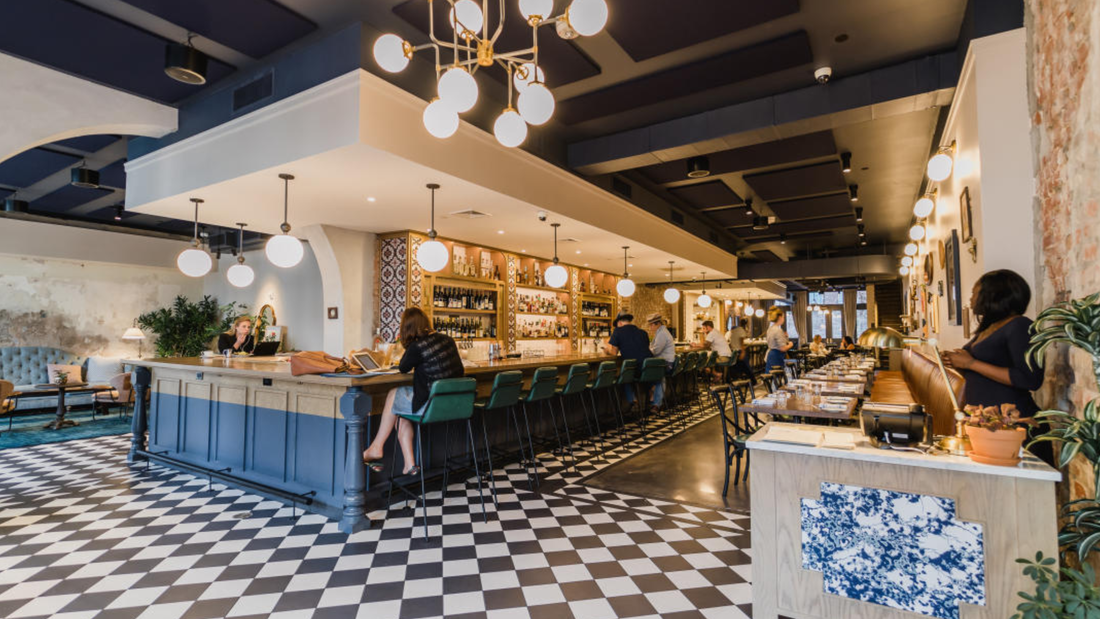 I first came to eat here when I stayed at the just-opened Eliza Jane hotel. Some hotel restaurants come across as an afterthought, but from the beginning, it was clear that Couvant was a full-throated part of the property’s songsheet. Back in 2018, Couvant was dishing up what you might call a ‘French Orthodox’ menu, one of the few places in town that was all-in on classic, traditional French cuisine.

A lot has happened since then, and a fresh face and outlook at Couvant is currently part of the Eliza Jane’s continued evolution (read our full review of the hotel here). Before we even sit down, it pays to note there’s a new executive chef en ville. Relatively new (to the property) Executive Chef Ryan Pearson has taken the reins, and while the underlying character of a French Brasserie remains, the menu’s horizons have been subtly broadened.

We slink into the dining room on a pre-Thanksgiving Tuesday night after a couple of stiff aperitifs from the hotel bar’s cocktail whizz, Michael Glassberg (I thoroughly recommend making time for this). It seems like there’s brisk trade, the dining room seemingly larger than when I was last here but no less full for it. Our company is date night couples in various stages of refreshment, a couple of families and a table of food influencers who are laser-focused on their phones and not talking at all, apart from to discuss lighting and presentation as each dish arrives.

Our server is perky with a nice line in quips that don’t seem rehearsed nor over-performative, my ideal dynamic if I’m honest. The menu is still very French. There’s Tête de Cochon as an snack, for instance, and a whole station set up for the irresistible Gougère (served with truffled mournay, and you’re correct, it’s a pretty decadent starter).

So far, so Champs Elysee. As the appetizer options appear, Chef Pearson’s gentle embrace of other influences becomes apparent, though. Yes, there’s a killer Pâté de Campagne that could grace any Dordogne picnic, but there’s also some plump Gulf Shrimp with Saffron Potatoes and a Blue Crab Gnocchi that I could have had two servings of without missing a beat. You don’t need to miss a beet, though…er, there’s a very good beet salad, that’s the joke.

I asked a few people - including bartender Michael - for entree recommendations and to a person, they salivated over the Brioche-Crusted Veal. I mean, vegans and vegetarians excepted, aren’t you intrigued just by reading those words, right now? Listen, I’m a sucker for anything savory that comes in pastry - pies, patties, empanadas, and you could put an old pair of crocs en croûte and I’d inhale it down. But in short, the milk-fed veal is tender, the crust is crispy and the king trumpet mushrooms and ‘sauce diable’ are a delight. Sign me up. I mean, I did sign up. No persuasion was even necessary.

My Dining Companion(™) ate the Dickens out of the Roasted Heritage Chicken (with mashed potatoes and morel sauce) and since we were here, we also tried the Crispy Skin Gulf Fish, embellished by Grand Isle Shrimp. Desserts dip back into classic French fancies: Fruit Galette, Profiteroles and Crème Glacée, with some very American Baked Alaska for good measure.

Fans of full-out French food can still very much enjoy a continental jaunt - Couvant still has croque madames at breakfast and panisses for brunch and, lest we forget because we dived into it with enthusiasm, a notably Francophile-leaning wine list. Chef Pearson has branched out, though, and it’s not in any way jarring, just a nod to the more immediate influences and ingredients that we’re lucky to have in this region. It’s a good thing, and, from us at least, it’s a hearty ‘bon chance’ to the new direction. (PO)