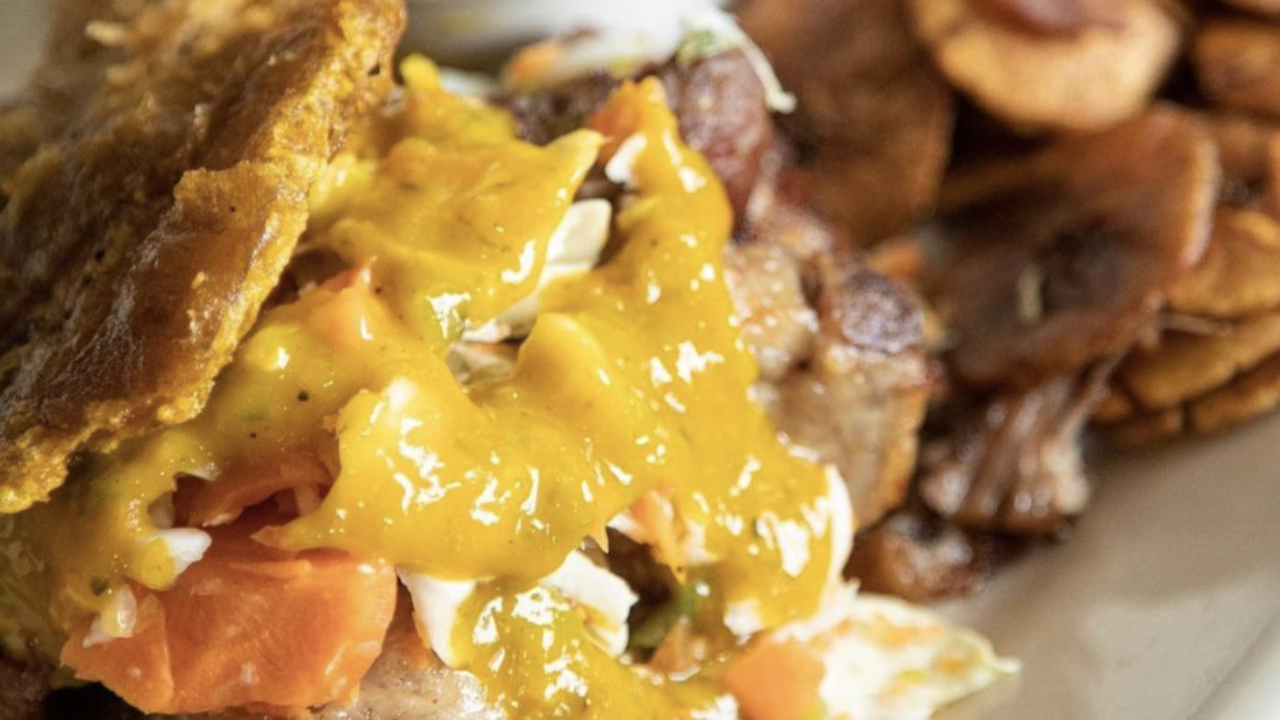 There’s a great Kids In The Hall sketch where a couple arrives at a restaurant, and the host asks them, “Would you like to sit in smoking, non-smoking, or the section where you talk about your relationship?” I only thought about this because I was trying to imagine a couple choosing Fritai as a place to break up. I mean, I genuinely don’t think it could be done, except under exceptional circumstances. Everyone in there is having way too good a time. Reconciliation would be inevitable. I mean, honestly, when’s the last time you ate out in a restaurant where your fellow diners were - to a person - having a noticeably good time?

The joyous energy is even more of a contrast to the nondescript end of Basin Street, just shy of the brutality of the overpass. The reds, greens, and golds of Fritai’s decor pop as you enter, Caribbean music drowns out the traffic and the only other sound that you can hear is that of diners audibly appreciating their meals.

I arrive early, about half hour after opening time, and the place is already popping. It’s a multi-generational, social ambience, with post-school kids and their grandparents, early evening couple dates and friends hitting the cocktails. I’m not here to break up with anyone, but if I was, I would be thoroughly reassessing my intentions.

I should probably mention that Fritai is a Haitian restaurant. As a talented and driven restaurateur, Chef Charly Pierre has evolved this place from a stand in the St. Roch Market food hall to a fully-fledged bricks and mortar. He blends his own Haitian heritage with modern American, and particularly Louisianan, influences, and it’s a goddamn delight. It’s not an easy task to deliver food that actually animates your clientele in this way, but he’s pulling it off in some style.

The menu is excitingly unfamiliar if, like me, you haven’t had Haitian food before. Just dive into it. Grilled shrimp comes out slathered in citrus and a spicy ‘pikilz’ coleslaw that cuts through the sweetness. The Creole Hot Chicken Wings land a playful kick, and the Fritai sandwich bulges with tender chunks of pork oozing with mango sauce. Exploring the ‘Tradisyonel’ entrees rewards you with mirliton and green plantains and succulent braised beef. For newcomers, it’s a fascinating culinary adventure and for those in the know, it’s a welcome slice of authenticity.

Citrus and fruit flavors dominate the cocktail program, with watermelon and passion fruit, rum and bourbon, papaya and mango all crashing the party. There’s a top drawer classic daiquiri and ‘Kremas’ that blend cream of coconut, evaporated milk, condensed milk, and vanilla with rum.

It’s hard to imagine a more upbeat dining experience, from the second you bumble up to the front desk. The teamwork and easy charm shine through, and first-time diners that might look askance at the menu are put at ease from the off. Outside of taking an international flight, this is as authentic a Haitian dining experience as you’ll get. Can Chef Pierre save your ailing relationship? I can’t promise that, but you’ll have a great time finding out.