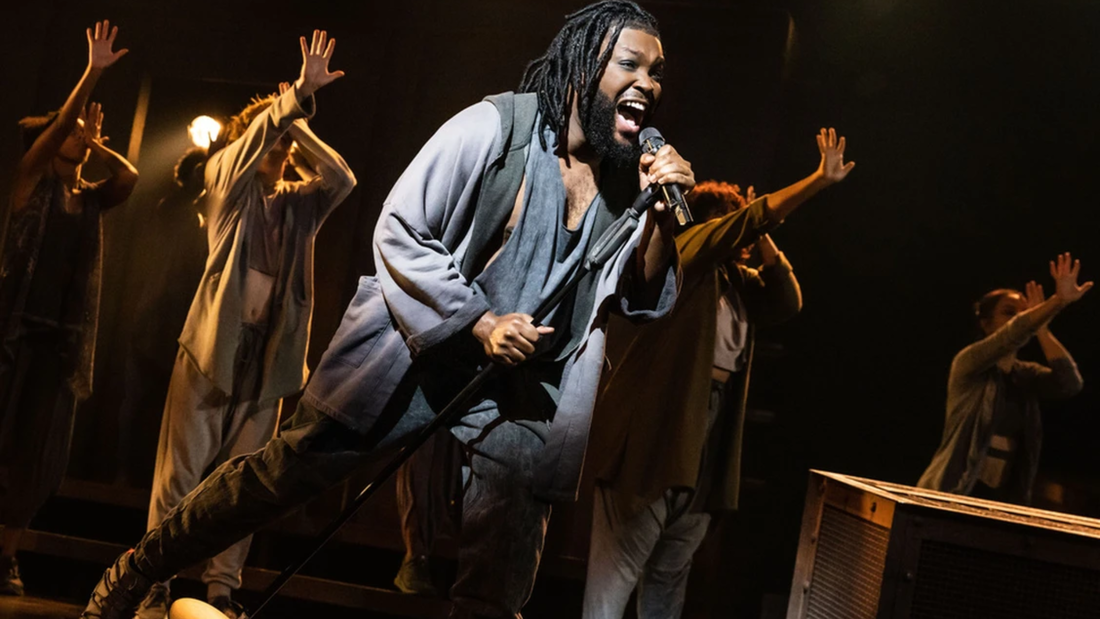 The last days of Jesus (Christ) have been variously portrayed in popular culture. Think of Willem Defoe’s hallucinatory cross-bothering in Scorsese’s The Last Temptation of Christ to Jim Caviezel spurting more blood than a Jaws outtake in Mel Gibson’s gory, anti-semitic diatribe The Passion of The Christ.

A singalong crucifixion also tops off Monty Python’s The Life of Brian, but there’s no more rip-roaring a romp through the final week of Nazareth's Next Top Saviour than Jesus Christ Superstar. Celebrating some 50 years as theater’s premier biblical rock opera, JCS - by Tim Rice (words) and Andrew-Lloyd Webber (tunes) - is more hi-voltage concert than scripture class, and this touring cast brought a near-heavenly performance.

We open on a brutally industrial/post-apocalyptic urban landscape, all metal beams, piles of bricks and flickering lights. Jesus - portrayed as a guitar-wielding, pretty-boy troubadour by Jack Hopwell - has attracted a palm-waving bevy of followers with a nice line in dynamic group dance numbers. His meteoric rise to fame and divine affiliation has also caught the attention of the (Earthly) powers that be, and betrayal and oppression are in the air. In short: he’s disrupting the religion business but it’s putting more than a few noses out of joint.

The show really is operatic, in that there are virtually no spoken passages. The story is sung via punchy rock songs and ballads that are very much of their late 60’s time period, but which retain a kind of retro cachet. Trimmed to a single act and brimming with kinetic energy as soon as the dancing disciples run through the audience to join JC, it’s a pacey rendition from the get-go.

The booming bass of Jewish elder Caiphas (Isaac Ryckeghem) and his sherriff Annas (Kodiak Thompson) assert their authority as they linger menacingly, and make snide advances to Judas to help them capture this rogue prophet. The vocally-impressive Elvie Ellis soars and screams his way through Judas’ moral dilemma, his hands and arms turning completely silver in an unambiguous visual metaphor as he accepts both the bribe and his fate.

Poignancy and bombast alternate as the dark forces gather. The excellent Faith Jones imbues Mary with tragic longing and humanity as she hits the spot with crowd favorite ‘I Don’t Know How to Love Him’. We segue into an arch, gold-clad King Herod (Erich W Schleck) ferociously demanding miracles in the amusingly rousing ‘Herod’s Song’.

A leather-jacketed Pontius Pilate (Nicholas Hambruch) wrestles with his duties as an enforcer for the Roman army as he seemingly tries to throw Jesus (who appears with increasing visual levels of bodily harm) a lifeline, but bigger things are in motion. The ensemble, never still for a second and a whirlwind of dramatic dance moves, switch between faithful followers singing ‘Hosanna’ and baying crowds yelling ‘Crucify him!’. A special shout-out to featured dancer and ‘Mob Leader’ Caroline Perry, who expertly balances frenzy with expression.

Jesus is in anguish for almost the entire second half, his human side struggling to accept the task before him, his divine half knowing that the ending is unavoidable. Spotlights fall chaotically across the stage, rebel yells pierce the air and finally, the cross is hoisted aloft. Darkness descends, pain is translated into guitar solos and the famous refrain of ‘Superstar’ rings out. (Sidenote: I have vivid memories of the school playground as six year olds in the mid-1970s and us singing “Jesus Christ! Superstar! Wears frilly knickers and a Playtex bra!”. We hadn’t even seen the musical but such was its cultural prominence that it merited a saucy parody).

Your focus is very much demanded from this fast-paced performance, which pulls off a number of visual tricks (including a clever Last Supper tableau) despite the stationery scenery. The live band and lead actors singing into microphones (and even playing guitars) gives it the feel of a high-octane music festival, and the vocal aplomb of Judas, Mary and Herod are given suitably rowdy applause breaks.

It’s a rare chance to see a legacy musical with a young, diverse and committed cast that yank it into the present day. Commandeer thirty pieces of silver and bask in the spectacle. It’s the original cross fit, and this touring production absolutely nails it. (PO)