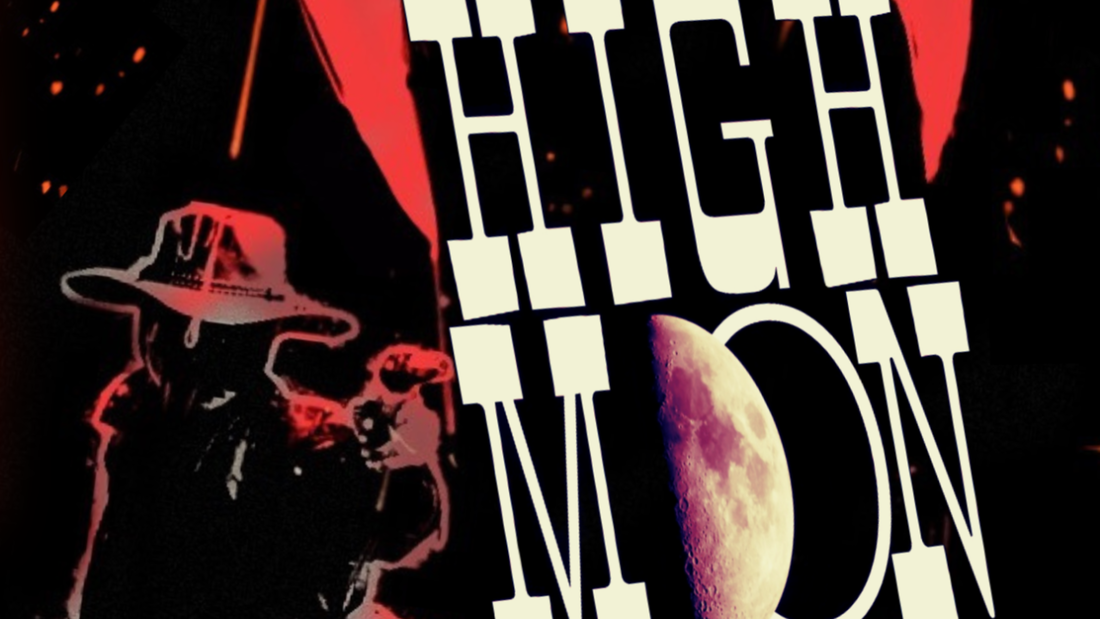 Leon Peter Blanda is a local writer and comedian. He recently wrote and released his first novel, High Moon, which you can buy via his website. Here's an exclusive excerpt to whet your appetite:

The shadow leaned in close, and Sylvester finally saw the thing’s pale, browless face, and sunken, red-rimmed eyes; hop-head eyes. Midnight-black hair started at a sharp widow’s peak and crawled back, slick as snakes, falling to his shirt collar in long, greasy strings. Underneath the pale stranger’s thin nose was a thick, handlebar mustache, scruffy, and black as his head hair. Beneath his mustache were two, pearly white fangs, terribly purposeful teeth like those of a coyote or a wolf.

Clasped in the dark stranger’s bony, clawed hand was Wesley Bestern’s flat sombrero with the broad brim. Glowing eyes jumped from the hat to meet the eyes of the shivering, young bandit. Holding the boy’s gaze, the thing slipped the big hat down over its greasy, black hair.

“Hmm. It fits.” Its lips never waver from an unnatural smile, but Sylvester hears its voice in his head.

A worn, leather gun belt sits low on its thin hips. In one of the holsters rested a polished pistol grip, made from a dark wood, almost as black as the gunmetal of the smooth cylinder. Sylvester could tell it was a foreign pistol, not a Colt or Smith & Wesson. A delicate, warm, gold filigree was etched into the cold, hard, dark steel of the gunmetal. The graceful, gilded ivy encircled the cylinder, and wrapped around the barrel tucked into the worn leather.

In the other holster, the flat, rusted head of an old entrenching tool stood in direct contrast of the fancy, shiny pistol grip. The broken, wooden handle of the antique tool was jammed snug into the leather, same as the barrel of his ornate, European pistol.

That sure is purrty, Sylvester thought to himself through the excruciating pain.

“The poker or the pistol,” the stranger asked. Again, without a word spoken. A thin slash of a smile tugged his handlebar mustache up at the corners revealing the sharp pearlies hanging eager beneath the blood caked facial hair.

“The… pissss-tol,” Sylvester answered woozy as a drunkard. His mind slipped into a slumber of sorts, while his eyes remained wide open.

“It’s called a Lefaucheux.” The stranger still didn’t speak, but it leans in close to the young bandit’s face. Breath, hot as a funeral pyre, smelled of iron and rot.

Sylvester wants to turn away, and attempts to do so, but can’t. The smell of metallic mold and decay radiated from the pale stranger and lingered in Sylvester’s nose. He felt the coldness of the creepy man’s skin between furnace hot breaths. Its bristly mustache tickled down his jawbone, as it sniffed like a hound dog at his collar.

What kind of man is this?— Sylvester began to think when a voice intruded on his thoughts.