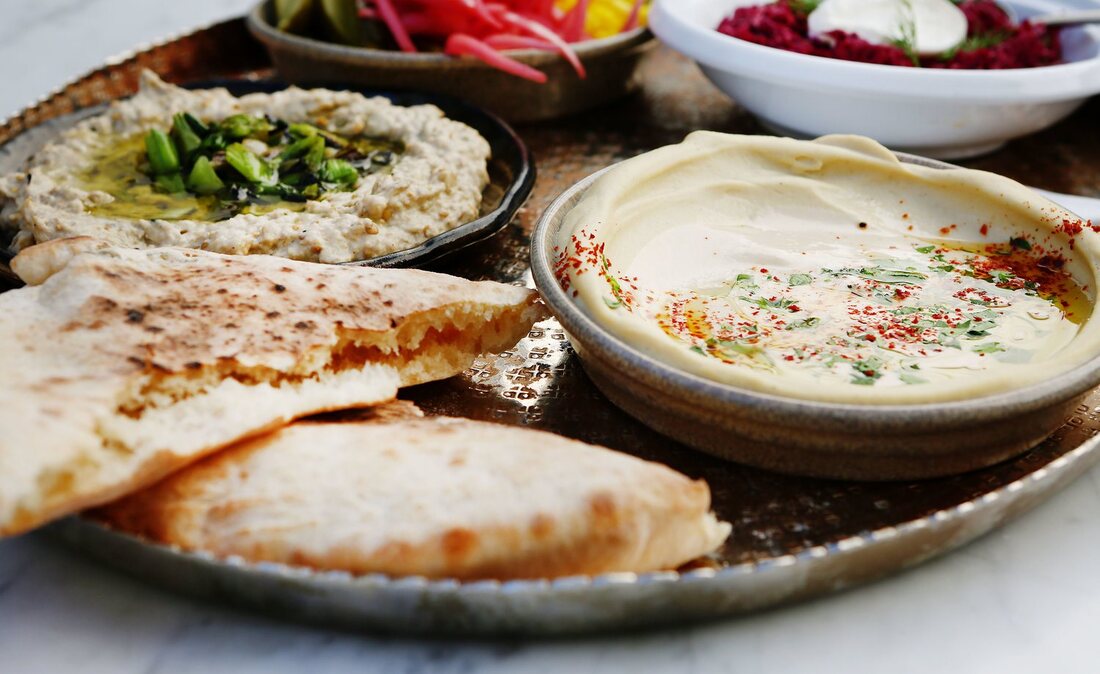 The pitta patter of tasty food at Shaya
The last days of summer are here, and what better way to savor the last of those warmer days than with Mediterranean dishes? New Orleans has a surprisingly diverse and expertly-crafted array of Lebanese, Middle Eastern, Israeli and Turkish cuisines. Some of these influences overlap, and some are celebrated in their own right. Here's our pick of the places to enjoy a last rush of those summer flavors.

1000 Figs
This intriguingly-named, cozy dining room in Bayou St John transports you via its décor and wonderful ambient aromas to the Cypriot countryside. The team behind the restaurant graduated from their much-loved food truck, Fat Falafel. It’s no surprise, then, that falafel is what they do best and arguably better than anyone else in the city. Gather your closest foodie friends and delight in the Falafel Feast, which allows you a grand tour of the kitchen’s best work. Perfectly-rendered falafel (crisp exterior, fluffy insides) come paired with hummus, baba ganoush, tzatziki, and pickled veggies galore (vegans and vegetarians will love this spot).
1000figs.com

Shaya
After leaving Domenica, chef Alon Shaya returned to his Israeli roots with this instantly popular uptown spot. Sadly, Shaya is no longer associated with the restaurant (see Saba, below) that bears his name, but the menu still garners rave reviews, a testament to the solid foundations that he laid. The buzzing contemporary dining room echoes to sounds of delight at the freshness of the Baba Ganoush and the Lamb Ragu Hummus, but particular praise is routinely heaped on the pita bread, which arrives toasty hot from the wood-fired oven. The classics are done to perfection, and entrees such as the slow-cooked lamb with whipped feta are made for savoring.
shayarestautant.com

Acropolis
As well as the name, the blue and white accents of the dining room hint at the Greek-focused menu at this Metairie café. Linens and fresh flowers elevate the dining room and the Greek owner-chef, Manoli Kardoulias, adds further authenticity. The restaurant is famed for its Six Onion Soup, ladled steaming into a bowl and topped with delicate puff pastry. It’s a delight, like a savory soufflé. The classic cheese pies are some of the best in the region and the fried, four-cheese ravioli is also a welcome addition to the appetizers. The menu is panoramic, though, with even a few more Italian influences creeping in, but the Moussaka is outstanding and the marinated, char-broiled, double-cut pork chops justify the many adjectives in the description.
acropoliscuisine.com

Cleo’s
A recent move from its original CBD location sees this 24-hour café move to Canal Street. It’s a busy place, with patrons arriving for take-out orders and people buying from the attendant grocery store, but it’s always good for a casual bite. The menu is as comprehensive as you’ll find, the Mezze Platter a great introduction to the house specialties such as kibbeh and labneh, though the spiced beans of the Foul Madamas is also especially good. A huge range of soups and salads (including Greek and Egyptian) backs up the mezze, with carnivores and vegetarians both well-catered for in the entrée selection. Delicious any time of day, but sets the bar for late-night quality.

Lebanon’s Café
The bold red walls and the colorful hand-painted murals certainly make for one of the more memorable dining rooms in town. The kitchen serves up Lebanese and Middle Eastern cuisine, with interesting twists in some cases – the hummus appetizer with fried cauliflower and pomegranate sauce being a solid case in point. Kebabs, gyros, and shawarma dominate the entrees selection, with notable diversions including the Safeiheh, a small, pizza-like dish with lamb, ground beef and spices. One of the better Uptown options and there’s even streetside dining if you want to watch the streetcar amble by.
lebanonscafe.com
​
Saba
What Alon Shaya Did Next. If Shaya allowed him to shift his culinary sights from Italian to Mediterranean, then Saba is where Shaya can focus even more on the myriad influences that make up modern Israeli cuisine. Bulgarian feta, Persian citrus and Moroccan spices all permeate the dishes, and even nods to Louisiana can be seen in dishes like the Blue Crab Hummus. It feels slightly more rustic than Shaya, and as well as Shaya’s signature unbeatable pita bread, there are curios such as the house-made potato chips and caviar as well as family-style feasts such as Harissa Roasted Chicken. Shaya continues to impress.
eatwithsaba.com

Mona’s Café
Perhaps the staple and best-known spot for Mediterranean cuisine in New Orleans is Mona’s Café. This local chain is actually three spots, one on Frenchmen Street, one on Magazine Street and one on Banks Street, meaning that you’re never too far from one of them. It’s as comprehensive a menu as you’ll find at their peers, affordably priced and freshly made. Some of the more interesting appetizers include Musabaha (chickpeas, hummus and hot peppers) and Qudsia, a mixture of hummus and Foul Madamas. The fried kibby is also a must-have and the herby Zater Bread is wonderful with more or less everything. Add a solid selection of gyros, kebabs and shawarma and it’s no surprise that the chain is a perennial favorite.
monascafeanddeli.com

Cleopatra Mediterranean Cuisine
Representing the West Bank, the food here is mainly Greek and Lebanese, with grilled quail and lamb shank standing out among the entrees. There's also an edging towards east Asia, with Chicken Tikka and Chicken Zarour also showing up on the menu. The choice of Kabob rivals anywhere in the city, and there's even an elevated, filet mignon version. Worth a trip if you don't live over there already.
cleocuisine.com