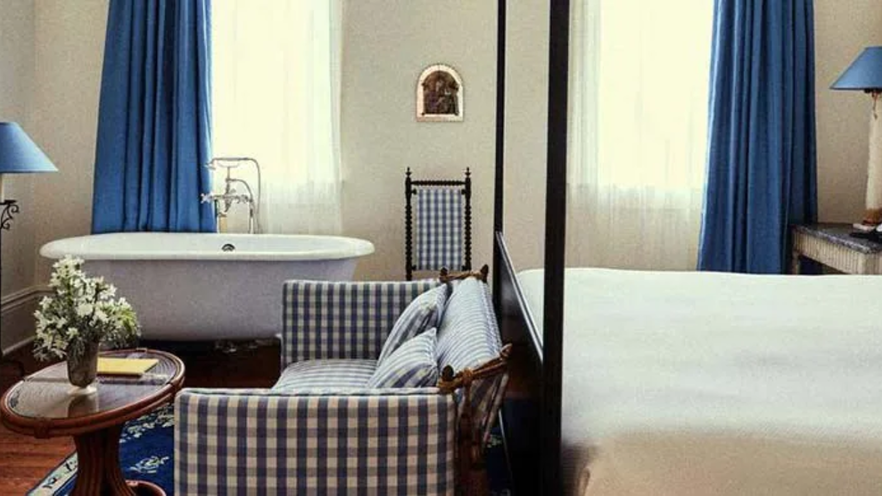 It takes a certain amount of sensitivity to open a hotel in a residential neighborhood and not have the people that live there clamouring for your heads. When Hotel Peter & Paul opened in The Marigny a few years ago, I half expected a vocally outraged reaction, but - even as a Marigny resident at the time - I wasn't aware of one happening. This is in no small part due to the deftness with which this hotel opened, with regard for its surroundings and a commitment to serving the community.

It’s a 71-room hotel, but you’d barely notice if you didn’t know it was there. Signage is at a minimum and the buildings (The Church, The School House, The Rectory and The Convent) have been left with as many original features as possible. Vintage and ecumenical aesthetics are mixed in the public spaces, giving the place alternatively holy and theatrical ambiences, stained glass windows and decadent swathes of fabric all contained within the relative austerity of the red brick exteriors.

Check-in is personal and sincere, as befits a neighbourhood hotel, with the quirks of the buildings and their layout patiently explained. In the room, a local almanac in the guise of a hymnal provides a primer on the city’s own idiosyncrasies. The Church is the event space and has an eclectic programme of performances and happenings, while The School House has a peaceful reading room replete with stage and a striking tromp l’oeil.

Given that the integrity of the original layout has been preserved as much as possible, it’s little surprise that the rooms (spread across all buildings save The Church) come in a wide variety of styles, from cosy attic spaces to more opulent options. One School House Grand Loft has a charmingly rustic feel, emphasised by the gingham furnishings. The bed is located on its own mezzanine floor, and there are some welcome touches, including a steamer instead of an iron for clothing and a fabric cover for the television screen. The striped-tile shower adds to the farmhouse look, but crosses and religious iconography ground you once again in the building.

The Rectory has the most obviously developed look of the complex, housing as it does the stylish Elysian Bar. Local wine purveyors Bachannal collaborate on the food and drink options, and plates such as steamed mussels with chorizo and roasted gulf shrimp can be guzzled amid period antiques and wall hangings. The cocktail bar itself strikingly blends a modern tiki aesthetic with beautiful, Gaudi-esque curved columns. For breakfast, only coffee is available but you’re close to some excellent cafés.

The hotel offering - decent hotels, I mean - outside of the CBD and French Quarter is pretty meager, but Hotel Peter & Paul has worked an impressive feat, and delivered an intriguingly chic option. That it’s also one that apparently hasn’t annoyed too many residents elevates the operation to a near miracle.