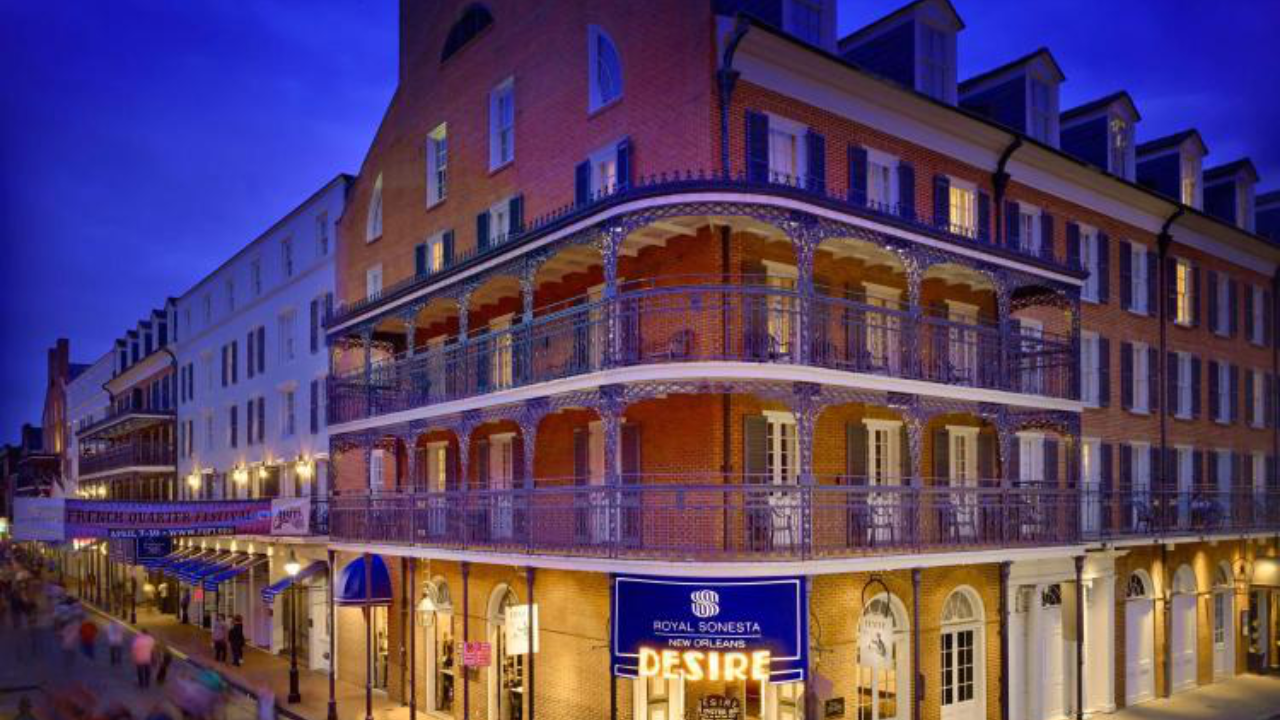 All opinions on locale are relative when you're situated on New Orleans' most divisive street, but let's take Bourbon Street's centrality as a plus for most visitors. Guests here have various French Quarter highlights within the kind of meandering stumble that most Quarter denizens favour: the Musical Legends Park, The Old Absinthe House and Galatoire’s Restaurant to name a few.

The rolling, 24-hour cacophony of Bourbon fades into tranquillity as you walk through the doors. You can self-assuredly step off the lurid stickiness of NOLA's main drag into another world, the capacious lobby providing immediate, elegant relief. Jello shots and strip club barkers are a world away as soon as you enter the building, with its Art Deco sofas, striking abstract art and colourful floral displays.

It's hard to imagine a more comprehensively friendly welcome, the wisecracking lobby staff (that appear to have been there for decades) shooting the breeze as you check in. That doesn’t mean they're ignoring their duties, though, and bags and check in are all dealt with without any wrinkles. The impressive aesthetics of the 6,000-piece art collection are backed up by hugely welcome amenities such as the heated outdoor pool - one of the city's best to my mind (a mind that balks at cold outdoor pools, that is).

An extensive renovation in 2016 spruced up the place no end, with expanded numbers of Club Level rooms and suites as well as a notably fresh look to the standard rooms. My Sonesta Guest room boasted royal blue bedding and maroon fittings, giving the place something of a whimsical look but without laying on the novelty too thickly. There's a risk of slipping into corporate mediocrity with some chain hotels, but features such as a marble-framed bathroom deliver a break from standard-room monotony.

In terms of choices, and arguably in terms of quality, there might not be a more better hotel food and beverage offering in the city. At the top end, there's Restaurant R’evolution, which combines one of the city's most memorably inventive fine dining experiences with one of its most evocative dining rooms. The restaurant bar, decked out like a 19th-century carriage house, is worth the price of admission alone.

The Desire Oyster Bar is a more casual spot for breakfasting  and lunching, checking off local classics such as po-boys and chargrilled oysters. Le Booze and the Jazz Playhouse provide a destination whiskey bar and slick live performance lounge respectively, the latter presenting a beloved, weekly burlesque review for good measure. There's also a handy onsite PJ's Coffee Shop, and so there's really everything from five-course haute cuisine to a quick bagel and everything in between.

The Royal Sonesta New Orleans might not have the centuries-old legacy of The Roosevelt or The Monteleone, although parts of the building date back to its late 19th century life as a bakery and then a brewery. Its exterior was made to pay homage to the look of French Quarter buildings in the 1830s, though. It can also claim to be the original location of the infamous Economy Hall, where Fats Domino came up, and so it has historical chops by proxy, and it remains one of Bourbon Street's more relaxing hideouts.