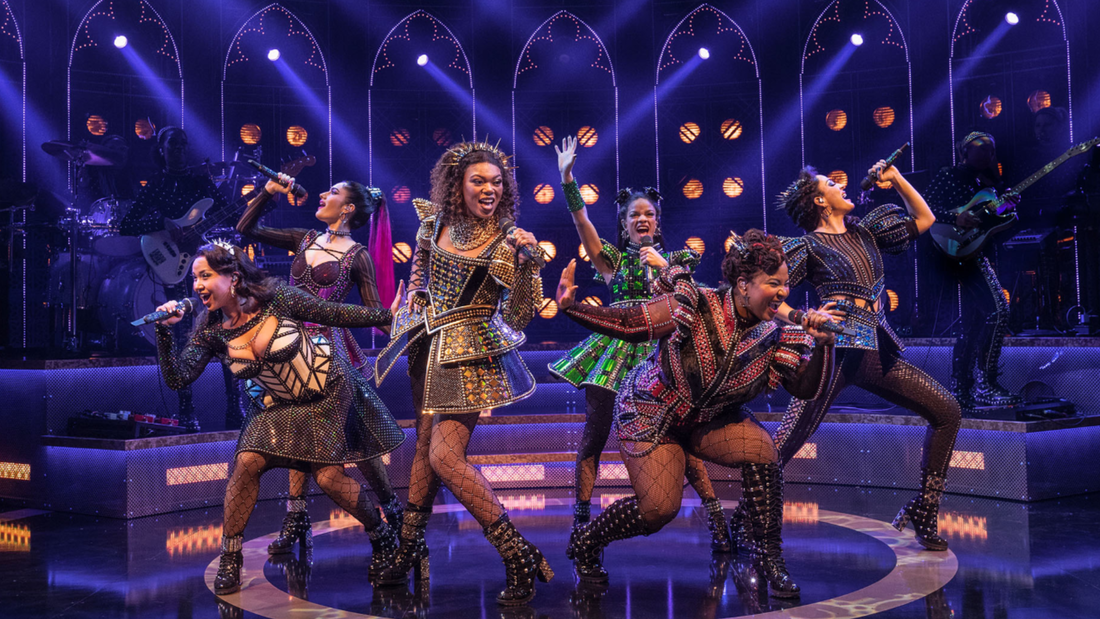 History in the making: SIX comes to NOLA
MUCH TUDOR ABOUT SIX THINGS
SIX @ The Saenger Theater
Eileen Daley

I’ll try to keep this review impartial, but I have to admit my hefty bias in judgment about this particular non-period period piece. I am a proud fangirl and loyal subject of Six, the touring musical comedy that is making its very first stop at the Saenger Theatre.

I was living in New York City when Six was set to premiere on Broadway, a little over a year after its West End debut. That was in March of 2020: historically, not a great time for musicals. The theater district was shuttered on the very same night that the six wives of Henry VIII were set to spill the royal tea for American audiences. But a dream deferred is also a chance for a meticulously planned comeback, and so, in its second opening week in September 2021, my best friend planned a trip from NOLA to NYC so we could be two of the first to revel in Six’s regal majesty.

We planned outfits complete with handmade crowns (you can take the costumer out of New Orleans, etc. etc.) before idly wondering if it was poor form to do so, like wearing a band’s t-shirt to their own gig. Reader, you may be shocked to learn that we were the only court jesters in costume on that sold-out night. What’s more, fellow audience members seemed alarmed by even our most tastefully restrained seat dancing.

We managed to have a great time anyway, but we lamented that we couldn’t share our favorite musical with our favorite people in our favorite city, where we were sure there’d be no shortage of appropriate reactions to a killer pop supergroup absolutely skewering their collective ex-husband. And now, our wish is finally granted!

Let’s address the elephant in the room where it happens: Six may be an educational musical parody of the past with colorblind casting, but its similarities to Hamilton end there. The genre-bending pop songs throughout careen from hip-hop to bubblegum sweet indie to power ballad, so there’s something for everyone here.

Their common characteristics are cheeky irony and ineffable cool, which prevents them from sliding into the embarrassing territory of high school history teacher rap. And while you might learn a handy mnemonic for the fates of the six stars (divorced, beheaded, died; divorced, beheaded, survived), the show’s not trying to edify as much as uplift and redefine the Real Housewives of Windsor Court. In fact, a little preemptive research might allow you greater enjoyment of the clever references to real queenly letters, quotes and speeches, as there’s no time to stop and explain. Six is paced more like a high-energy concert than a stage musical.

The premise is simple enough. In a liminal space defying time and mortality, the wives are forming a girl band together. They compete to determine who will lead, based on how much Henry royally screwed them over. After the six-part company sets the stage (“Ex-Wives”), each queen gets her own time in the spotlight—with plenty of sly digs and diversions along the way. We even go on a field trip to Germany to learn the ancient art of thirst trap portraiture (“Haus of Holbein”).

You’ll have to use your imagination as your passport, as the set is minimalist just like the Broadway show, made up of lights and LED backdrops used to great effect. The stage never feels bare, though, thanks to eye-catching wardrobe that sparkles all the way to the balcony, as well as the onstage band of rockstars known as the Ladies in Waiting.

The starring queens are gracious competitors who lend their choreography and backing vocals to each other as needed, right before cutting them off at the knees. The combative chemistry between the ensemble cast is contagious, so you may be hard-pressed to name a favorite by the end.

Catherine of Aragon (Gerianne Pérez) starts in with the righteous defiance of a queen for whom the concept of “divorce” was coined just to punt her off the throne. Her rival Anne Boleyn (Zan Berube) breathes new manic energy into the trope of a conniving palace-wrecker. She swings from precocious “sowwee, not sowwee”s to rumbling growls faster than a Frenchman can swing a sword. The lone Henry-loving outlier, Jane Seymour (Amina Faye) is tenderly moving in her devotion to her flawed king. Faye’s belting performance elicited cheers and claps from a wowed audience before she even finished her anthem.

But the victorious heights of regal alimony to which Anna of Cleves (Terica Marie) soars are hard to top. She appears to be having some serious fun in the role. Katherine Howard (Aline Mayagoitia) draws you into her tragic life of constant objectification with moves and notes as flashy as her hot pink ponytail. The final wife, Katherine Parr (Sydney Parra) shines as the conscience who brings her predecessors together for a rousing finale.

And as for the audience? Was New Orleans ready to second line this royal spectacle all the way to Royal Street? Obviously, I wasn’t the only one that dressed to empress this time. The fan favorite numbers were hotly and loudly anticipated with cheers. My seatmates definitely enjoyed themselves, and I had plenty of wiggle room. But this was opening night! It could have been the luck of the draw. With only seven performances left, I hope you’ll come and sway the odds in swinging’s favor. Don’t forget your crown, or on your own head be it.