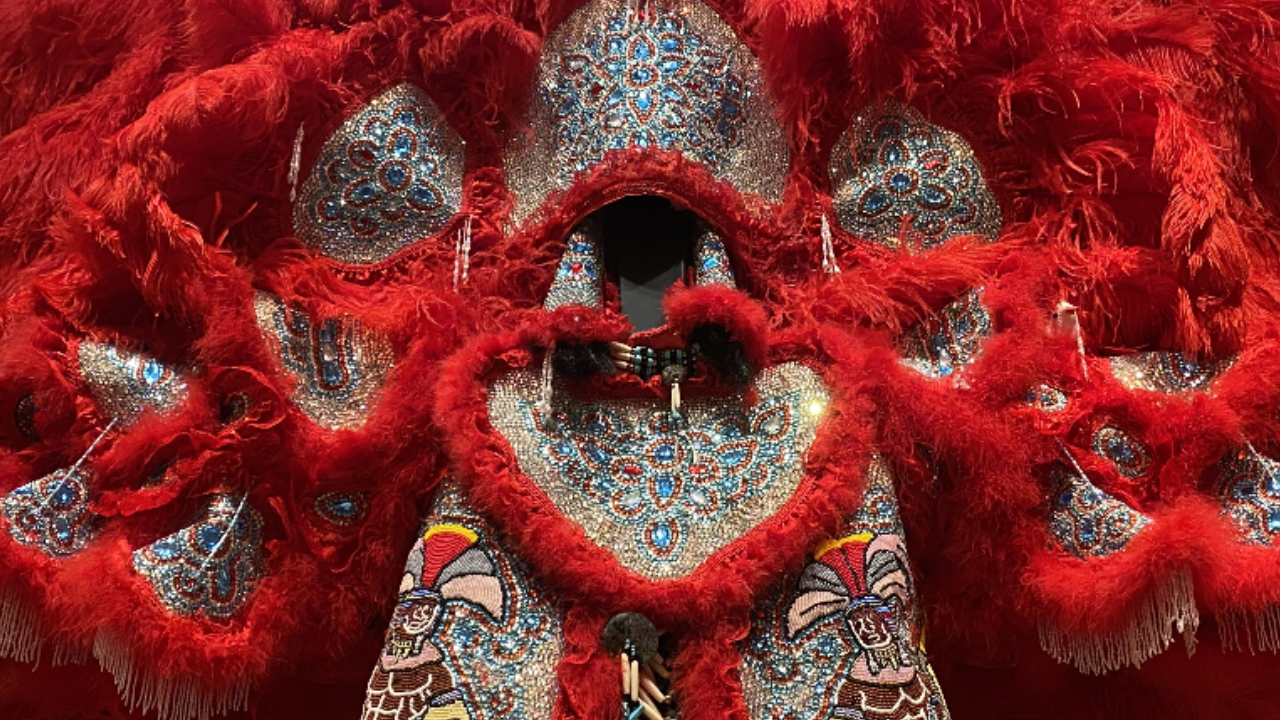 This newly-condensed exhibition at The Historic New Orleans Collection (520 Royal Street) is billed as being ‘educational for visitors and inspirational for locals’. As a decade-old transplant, I feel like I straddle those two worlds fairly equally, and any chance to learn more about the city’s traditions is a welcome one.

It’s easy as an out-of-towner to get lost in the hedonistic superficiality of ‘The Greatest Free Show on Earth’ but tapping into the real spirit of Mardi Gras takes more than dousing yourself in glitter and drinking cocktails as you bundle out into the streets at 7am on Fat Tuesday.

Entering the exhibit, you’re immediately confronted with the looming scarlet magnificence of the Creole Wild West Mardi Gras Indian Suit by Chief Howard Miller. It’s humbling to see this kind of craft up close. The explosion of feathers and astoundingly intricate beadwork are a work of art equal to any museum piece. This is the Sistine Chapel of Mardi Gras outfits, certainly when compared to my casual efforts - at best a clumsily-painted garden fence in comparison.

Chief Miller’s Indians have been around since the 1830s, and the group has been documented since the 1880s, an undeniable cultural history that lives on through its guardians today. I guess I knew vaguely what the Mardi Grad Indians represented, but it’s good to have it laid out. The exhibition celebrates “a legacy of parading, music and craftsmanship passed down through generations…established by New Orleanians of African descent to honor their enslaved ancestors and the aid they received from indigenous peoples.”

That honor is overwhelmingly obvious in a piece such as this, and like all suits of its kind, it is only worn three times - on St Joseph’s Day, on Mardi Gras Day and on Super Sunday - before the process of making a new suit begins. Its ephemeral nature adds to its mystique and importance.

The Indians form a substantial part of this exhibit, with videos on their traditions and the making of these suits, but we pull back to take a more general look at Mardi Gras Day throughout its history. There are mounted photographs from as far back as 1915, and it’s funny to look at some of these century-old revelers and realize that - cultural references aside - not that much has changed in the way we costume and celebrate.

A video compilation of each decade from the 1940s and 50s plays, and again, some scenes could be from 2022. More photos and prints illustrate the many facets of the holiday - illustrations of floats from the 19th century, black and white snapshots from the postwar era, unfinished beadwork from the 2000s that exposes each painstaking process. A 1938 costume for the King of the Krewe of Dorian and the 1940 Mystic Club Queen’s costume flank the Creole Wild West suit, and look relatively dowdy, even though they’re both elaborate in their own way.

It’s a compact, accessible exhibition about the nature of exhibition itself - its traditions, its aesthetics and also its role as a transformative and quasi-spiritual practice. Well beyond the bead-soaked balconies of Bourbon Street, there’s a fundamental legacy being honored, a culturally important one that continues to resist the entropic forces of commercialism. Making Mardi Gras is a welcome education on why that matters.
​
Paul Oswell