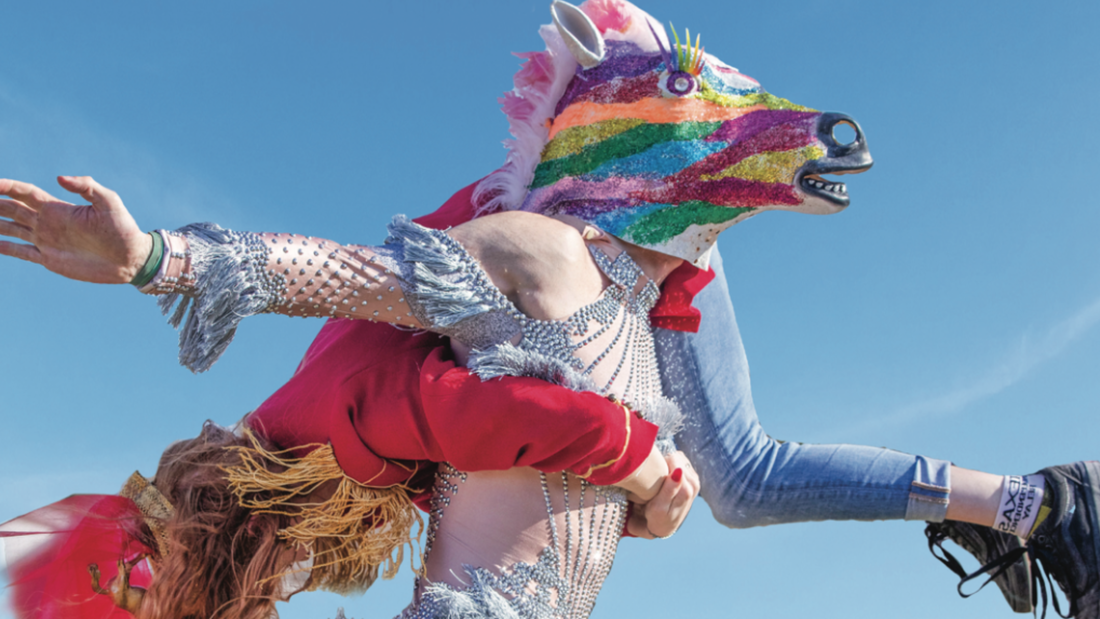 Horsin' Around: The Human Horse Races on Thanksgiving Day
Given that the city is obsessed with food and drink year-round, Thanksgiving's excesses are hardly a blip on the culinary radar in New Orleans. That said, the date marks the start of the holiday season and as well as some marquee day-of events, it's the first day of ongoing seasonal activities that go on through the New Year. Here's a round-up of some Thanksgiving Day highlights, together with a look at some of the local festive traditions that start around this time of year.

Thanksgiving dining
After a couple of years of mainly takeout operations, the city's restaurants are gearing up for a return to in-person service. Most of these restaurants open their doors at 10 or 11am. Expect shrimp and mirliton dressing to figure highly on many menus, it's the season, after all. If you're at the racecourse, it's not too far to Ralph's On The Park, where a $65 three-course meal comes with squash and pumpkin soup, crab ravigote, seared duck breast, etc. LGD favorite, Jack Rose (see our review, here!) has a prix fixe menu ($60-$70) with non-traditional options such as lamb bolognese. In the Quarter, the big guns are firing up their kitchens, and there's high-end traditional fare to be had at Galatoire's, Arnaud's and Broussard's. Similarly extravagant but classic Thanksgiving dishes can be had at Tujague's, The Grill Room at the Windsor Court Hotel and Brennan's. Couvant at The Eliza Jane Hotel puts gourmet twists such as turkey breast fricassee into the mix, and if you want to go even further off-piste, then the blue crab chaat, turkey tikka masala and beef short ribs at Mister Mao might be up your street.
​
A day at the races
Human, horse, or horse/human hybrid? Whatever your preferences, there's an event for you on Thanksgiving morning. The start of the racing season at the Fair Grounds Race Course is a New Orleans tradition, with many people dressing up to watch a full card of racing (the first race is at 12 noon). The human equivalent starts much earlier in the day, with New Orleans Athletic Club's Turkey Day Race taking place at 8.30am at Tad Gormley Stadium. The NOAC event is one of the oldest, continuously held non-marathon races in the United States.  Finally, a recent addition to the Thanksgiving Day calendar is the Human Horse Races. This family-friendly event "exists to raise money and awareness for local animal shelters and promote cruelty free experiences, while celebrating in classic New Orleans style". The 3rd Annual Human Horse Races will take place from 11am-3pm at Easton Park in MidCity.

Nightlife highlights
​Once the eating is out of the way, you might want to dance off those calories, and there's a feast of local music happening on Thursday evening. The best options include the Brass-A-Holics at The Jazz Playhouse (7pm), Fritzel's All-Star Band at Fritzel's European Jazz Club (8pm), Where Y'At Brass Band at Blue Nile (9pm) and the Soul Rebels at Le Bon Temps Roulez (11pm).

Festive events through December
Thanksgiving also kickstarts some seasonal events that run through Christmas and the New Year. Thursday night sees the start of Celebration in the Oaks, City Park's expanded holiday festival, including a driving tour, amusement park rides and a reimagined walking tour. It's also time to start booking in for Reveillon dinners. These are a Creole dining experience that dates back to the mid-1800s, originating with a family meal when families returned home from midnight mass. Restaurants across the city now serve up special, four-course holiday meals in the spirit of this tradition. We'll round up the best options next week.
​
More New Orleans' culture reviews!
Copyright © 2022