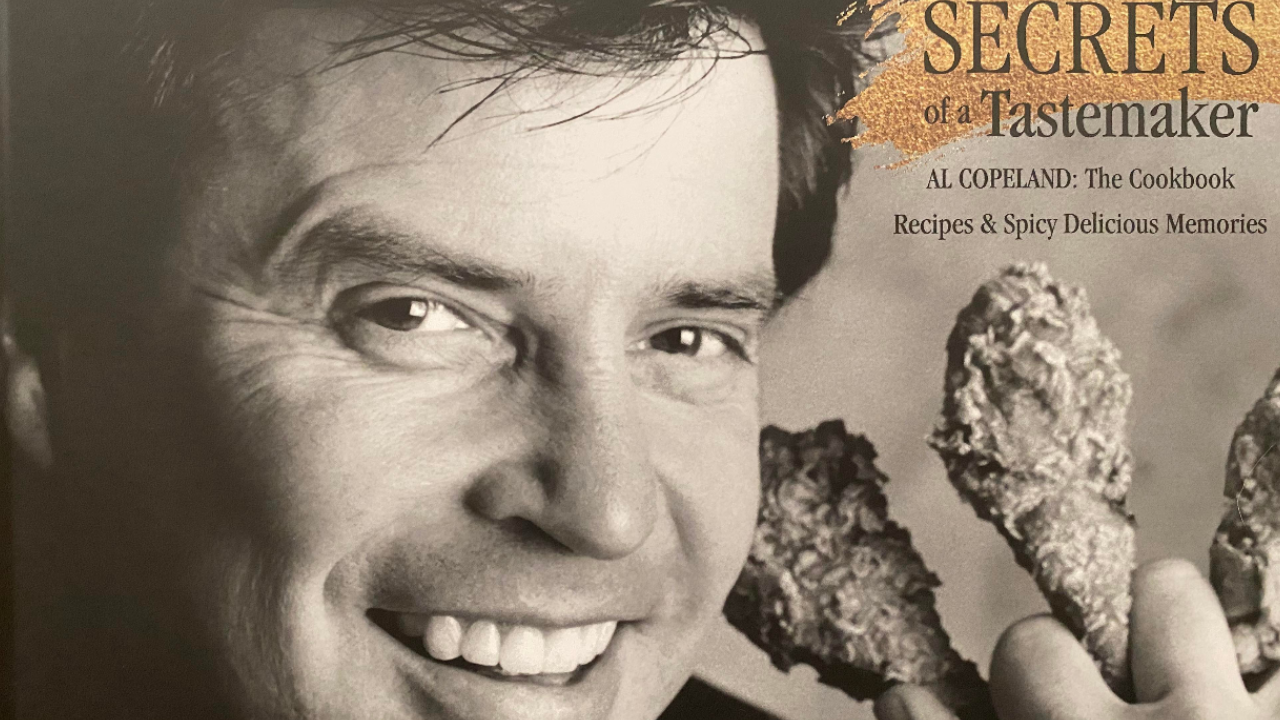 You can call me Big Al: the lowdown on how Popeyes became a fast food giant
Secrets of a Tastemaker:
Al Copeland: The Cookbook
by Chris Rose and Kit Wohl

I didn’t really know too much about Alvin Charles Copeland, aka Al Copeland, aka Big Al, before I picked up this biography/coffee-table photo tribute/recipe book. I suppose I knew he was a big character, that he created Popeyes (“I was too poor to have an apostrophe”) and Copeland’s, about the Christmas decorations and the speedboats and the wives and the fight with Anne Rice. Wait, I guess I actually did know quite a lot about Al Copeland. I mean, compared to the lives of other entrepreneurs, certainly.

I didn’t know his origin story, that his first store, Chicken on the Run, was a failure. He tweaked the recipe, added dirty rice and hand-rolled biscuits, and came back with Popeyes Mighty Good Fried Chicken (I guess he could afford adjectives), which became Popeyes Famous Fried Chicken, which became Popeyes. If only he could have seen the furore that the company’s chicken sandwich created in 2019. Oh, a bit of trivia I didn't know: Popeyes is not named after the cartoon sailor, but after Popeye Doyle, the steely detective played by Gene Hackman in The French Connection.

If you’re looking for hints at how to create his chicken at home, you’re out of luck - it says right on the cover, “Popeyes recipes not included”, so you’ll have to make do with his beloved cheesecake, as well as literally dozens of other dishes. You do get the biscuit instructions, with their ‘tight dough’ and ‘loftier finish’, so that’s something (My favorite photo is the 18-carat gold biscuit that the company had made for Al as a surprise birthday present, such was his obsession with creating the perfect biscuit).

The cover is quite something. There’s Big Al, his teeth gleaming even in black and white, holding up a spread of chicken drumsticks, fanned out next to his face between his knuckles, like a magician with a deck of cards, or a knife-thrower showing you the weapons. I suspect, just by reading the snippets from his life, that he directed every photoshoot, was brimming with ideas for every aspect of his business. He’s one of those high-school drop-outs that leaves because they feel constrained, they’re too agitated with possibility and they can’t wait to get out into the world.

This book is comprehensive if nothing else. It’s really all you need to know about Al Copeland and his recipes, and there are photos of everything from his famed Christmas decorations to his elaborate funeral, but here are a couple of highlights:

Apparently, Al Copeland was what’s known in the food industry as a ‘super taster’ (which also provides some nice wordplay for the title). His ability to discern even very small differences in seasonings and recipes - to an incredibly precise degree - earned him the nickname ‘The Spice Whisperer’. He could apparently do this with oils, herbs, proteins, you name it. In the test kitchens they would say he was ‘splitting the atom’.

The chapter Food Fight gives a very entertaining synopsis of his public spat with Anne Rice. It started when he opened a restaurant Uptown in a former car dealership, a site connected to her most popular vampire, Lestat. She called the (admittedly garish) design “a monstrosity” in an ad she took out in the Times-Picayune. He wrote a combative but cheeky open letter to the same newspaper, and said that he would put a little more garlic in the dishes to fend off vampires.

All good, knockabout fun. They’re similar people in some ways, taking on well established institutions (fried chicken restaurants and vampire novels respectively), and coming at them with their own original ideas. Mardi Gras costumes were designed around the feud, and the restaurant got way more publicity than it otherwise might have.

Even if you just use this as a recipe book, it’s a great-looking product, with huge color photos and a wealth of surprisingly diverse dishes to try, from cheese grits to Eggs Benedict Provencal. The stories about Big Al, whatever your opinion of him, are never less than entertaining, and it’s a detailed portrait of a very public New Orleans figure. Look at where Popeyes is now. It’s hard to fault the man’s business instincts, however you feel about his showmanship.
​
Paul Oswell

Secrets of a Tastemaker (The Cookbook Studio) is out now
MORE REVIEWS!
As You Like It at Tulane University
Queen Neferati's Egypt
Copyright © 2022