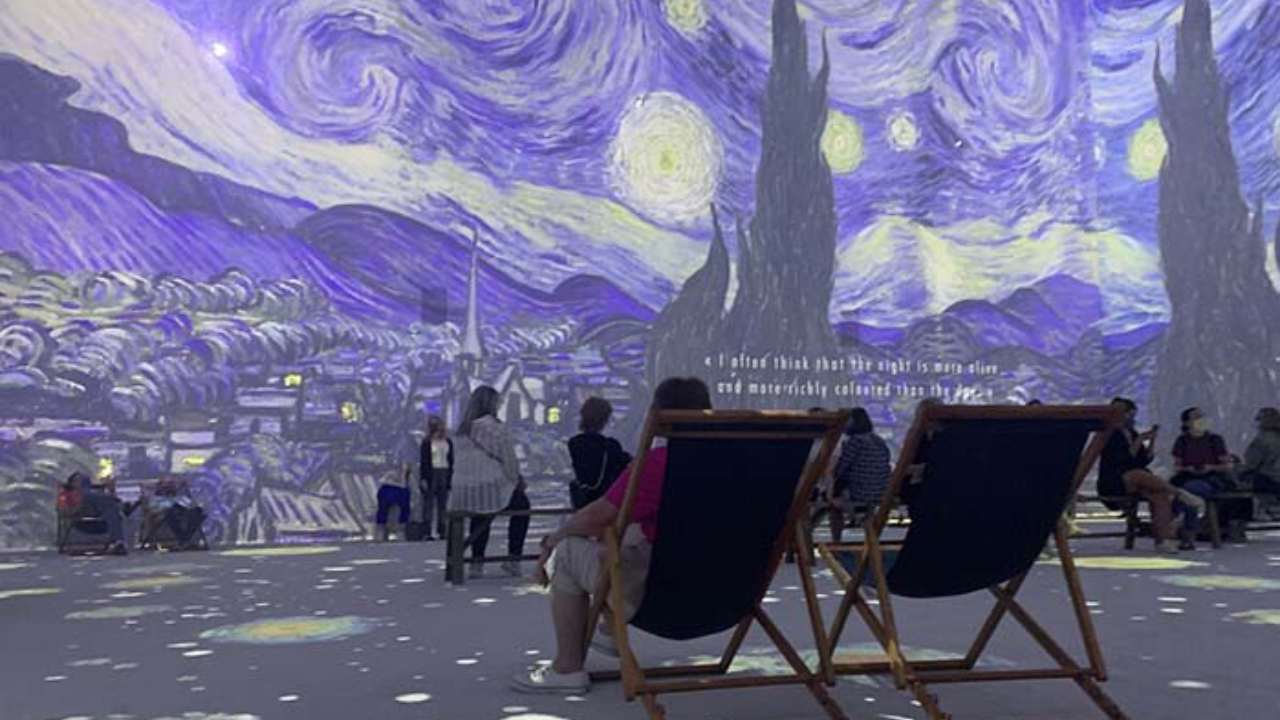 If you know one thing about Vincent Van Gogh, it’s probably that there was an entire Doctor Who episode about him. If you know two things, and if you watched said episode, you’ll know that he only sold one painting in his lifetime. This could be a myth, though, as several art historians argue that he sold TWO paintings while he was still breathing, so, you know, in your face, I guess?

What is inarguable is that Big Vinny V Gogh has enjoyed almost unparalleled exposure in recent times. This ‘immersive experience’ is a global phenomenon, such as he could never have imagined, even if it was presented by a dandy, shapeshifting alien timelord.

Welcome, then, to Van Gogh - The Immersive Experience. I don’t want to lay down too many spoilers, because the surprise element of the format is a big part of it. The first section is a collection of his most famous (and some more obscure) works, presented in ways that you’ll likely not have seen before: 3-D renderings, paintings that you can almost step into and some neat optical illusions. This part also tells the story of Gogh Johnny Gogh’s life, both through dramatic voice-overs on the public address system and informative plaques.

The main event is the huge, 360°-digital presentation. It’s a capacious warehouse where you’re invited to sit on deck chairs, lie on the astroturfed floor or generally sprawl however you feel most comfortable. Along every surface, paintings dance, colors transition and images come at you from every angle. More of Van Gogh’s life is narrated. It’s like an IMAX cinema presentation but even more…what’s the word? Oh yeah, immersive.

The final stage, for those who paid extra, is the Virtual Reality (VR) tour. Now, I’m not the best control group for this, admittedly. I had never experienced VR before, and so the excitement of the headset and the new technology was an additional rush for me. That said, it was pretty amazing to be able to explore a world of Van Gogh landscapes, where you could zoom in or linger on whichever parts attracted you the most. In short: I really enjoyed it, but some of that thrill was inspired by the VR itself.

The main question I’ve been asked since going (Goghing?) is this: Is it worth the money? It’s $32 for an adult ticket, and $49 if you want the VIP experience, which includes the VR tour and a free poster. I’ll say this: if you’re really into Van Gogh, then it’s inarguably a novel and evocative way to experience his art. If VVG is only a passing fancy, then perhaps it’s not. Although I’d still argue that the technical aspects of the show alone are worth a look, and if you’ve never experienced VR before, then it’s a great opportunity to do that.

Either way, Vincent Van Gogh is world famous at last, and perhaps this kind of event is the way art galleries will choose to exhibit art. Many are edging that way already. If it opens that exposure up to adults and children who might not like traditional galleries then, as long as it can remain affordable, that has to be a good thing.

For more information on and tickets to Vincent Van Gogh - The Immersive Experience, click here!
MORE REVIEWS!
As You Like It at Tulane University
Queen Neferati's Egypt
Copyright © 2022