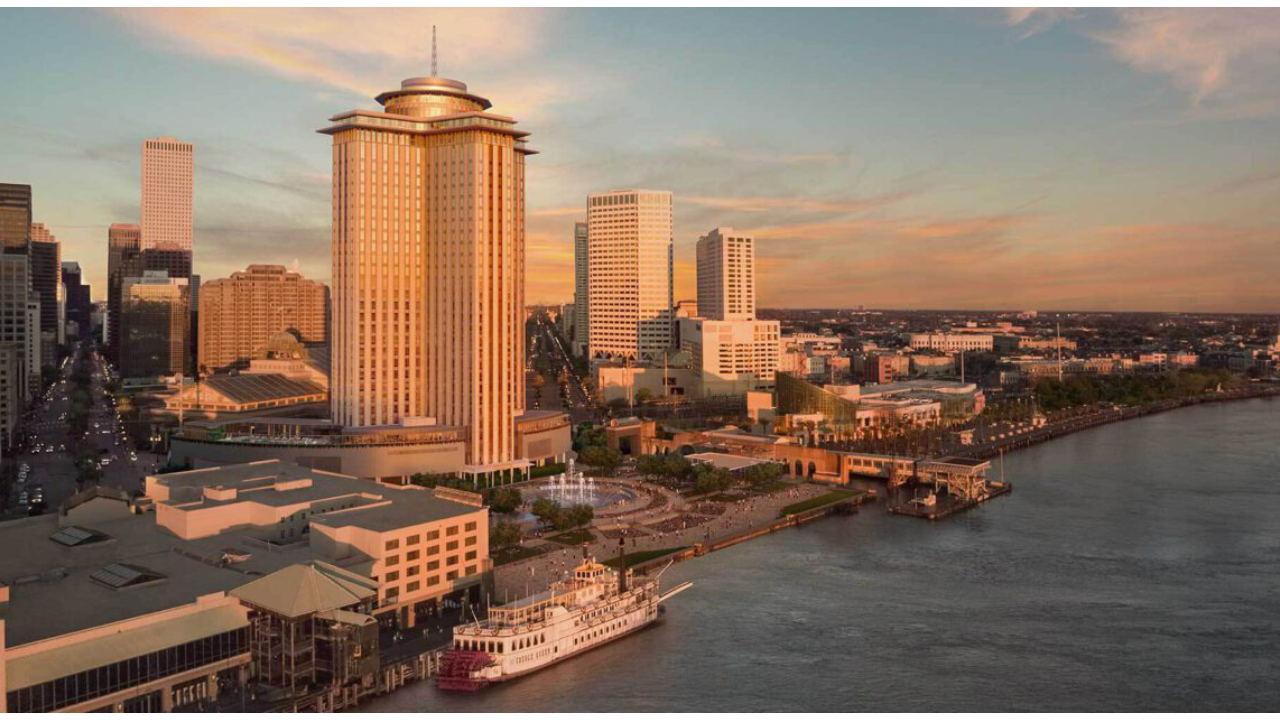 The chosen view: Looking out across the river at Vue Orleans
Vue Orleans

Everyone in New Orleans has, by definition, friends in low places thanks to the city’s architecture. The skyline is overwhelmingly just a couple of stories high, with views of the city mostly confined to rooftop bars or executive offices in the refined air of the top levels of Benson Tower.

Now, I’m no big city architect, but I assume that skyscrapers don’t fare too well when built on swampland, what with the sinking and the…well, that’s enough reasons, really. New Orleans doesn’t have an Empire State Building or a Sears Tower, but you know what it DOES have? The old rotating nightclub at the top of the former World Trade Center.

Previously known as Top of the Mart, the upper levels of what is the new Four Seasons Hotel have been transformed into a major new city attraction - Vue Orleans Observatory, “a 360° observation deck and interactive experience high above the Mississippi River”. Last year I visited the Grand Canyon, and as I stood at one of the viewing spots, a six year old kid was running around yelling WHAT A GOOD VIEW, WHAT A GOOD VIEW and, you know what, he wasn’t wrong. OK, the French Quarter isn’t the Grand Canyon, but I was looking forward to a new perspective anyway.

I was sad to wake up to a monsoon the morning of my visit, but luckily the rains had cleared - enough for me to navigate my car along the canal on my street, anyway - by my early afternoon slot (tickets are timed so that there’s no overcrowding). The entrance is via some stairs at the end of Poydras Street, but before you even ascend to the heady heights of the 34th floor (look New York, this is very high up for New Orleans, OK?), the initial interactive part of the experience awaits.

You soon learn that, far from being just window dressing to a decent view, Vue has invested a fair amount of time and money getting this right. Huge screens with high-definition maps can be explored simply by pointing at them, and the city’s geography, history and culture are all explained via various illustrated menus. Every few minutes, there’s a ‘breakout session’, and dancers and musicians take over every screen for a minute or so of high-octane brass band action. It’s really fun.

On your way to the elevator, there’s a further video (of five minutes or so), tracing the story of New Orleans. Narrated by Irma Thomas and rendered in beautiful rotoscope animation, you’re surrounded on three sides by ever-shifting scenery. It’s beautifully done. The storytelling doesn’t even let up in the elevator, as this too becomes a screen for more city stories, alligators and birds flashing right before your eyes. There isn’t a wasted second.

You alight 33 floors up to the first observation deck. This is an indoors affair, with a 360° view as promised (give or take a little maintenance). A series of interactive screens are available for more information on the location that you can see from each point. Attractions, places of interest and landmarks all pop up and visitors can click through to find out more. Again, it’s a neat idea and helps people make the most of what they’re seeing.

There are a couple more larger, interactive presentations looking at city history and black culture in the city, and then a chance to do something that surely every local has thought about: navigating a huge container ship around the bends of the Mississippi River. Yes, you can grab the wheel of your vessel and try this computer simulation of the river bend, dodging steamboats and other ships as you go. I had successfully driven my car through pretty deep waters just to get here so I was feeling pretty cocky, but let me tell you, steering that ship is harder than it looks. I assume I’m insured, and the damage looked cosmetic, to be honest.

There’s one more level to explore, with a quick hop up to the 34th floor. Here you can stroll outside around the perimeter of the tower, and take in yet more unusual views of the city - the vista looking straight up Poydras Street is particularly dramatic, and even for long-time residents, there’s a sense of seeing the city and the river anew. There’s also a cafe up here if you want to eat and drink looking out over downtown.

I’ve been to quite a few tall towers in various places, and while we may not be 70 floors up, this is honestly one of the better experiences I’ve had. While a lot of places are happy to sit back and let the view do the work, Vue engages you from the start, and the video displays, movies and interactive exhibits are all really well executed. Locals will know a lot of the city’s stories already, but they’re presented in such a dynamic way that it’s hard not to be impressed. Come for the stories, stay for the, er, stories. What a good view.

MORE REVIEWS!
As You Like It at Tulane University
Queen Neferati's Egypt
Copyright © 2022