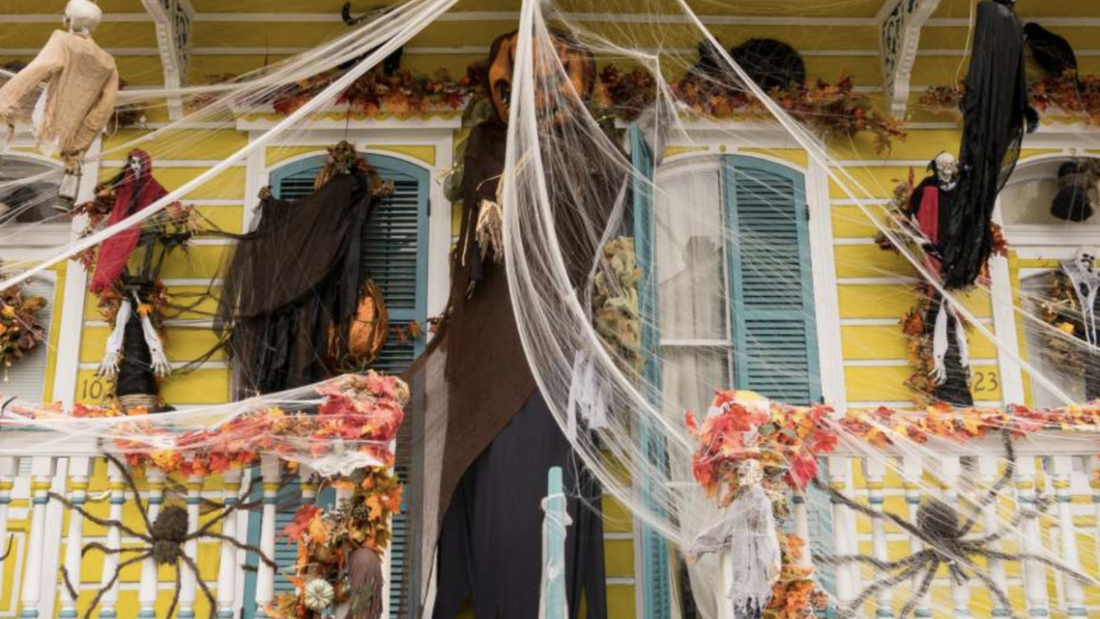 Skeleton staff: Locals go hard when it comes to Halloween decorations
There aren’t many cities in the world that go as all-out for Halloween as New Orleans. If the holiday had a spiritual home in the United States, then we’d be in the mix with Salem for that title. The historic architecture, the vampire lore, the cemeteries and the general high-spooky atmosphere of the city (even outside of the Halloween season) make for an ideal backdrop for this weekend.  There’s obviously a lot going on all over the city as we collectively throw ourselves into the fray, so here’s a guide to the highlights and to help you plan your Halloween hi-jinx. For more detail, you can also see our weekly events diary.

Costuming
When the actual day of Halloween isn’t on a weekend, people (especially visitors) often wonder which the best day to costume is. Since the celebrations ramp up from Krewe de Boo parade (last Saturday), you can really get away with costuming every day until the 31st. Obviously Friday and Saturday nights will be the busier nights in terms of crowds, but people will be out on Monday as well, so don’t be shy - costume every day for the next five days if that's your bag.

Suitably spooky attractions
Here in the city we have a wealth of attractions that are creepily evocative to visits at any time, but at Halloween they seem particularly on point. You could start with the Museum of Death or the New Orleans Pharmacy Museum. The first has exhibits such as a skull collection, a potted history of cannibalism, and stories from true crime scenes. The latter is a dusty, historic apothecary telling the story of medicine over the centuries and detailing some macabre medical practices no longer practiced. We’re also informed that JAMNOLA will be featuring some special programming and exhibits for the month of October.

Take a tour
Walk around the French Quarter as the sun goes down and you’ll see a glut of ghost tours. There are so many to choose from, the most popular probably being the Haunted History Tour and French Quarter Phantoms, both of who offer a variety of tours for your specific tastes. A limited time tour is the excellent Creole Death and Mourning tour hosted by the Gallier and Hermann-Grima Houses - you can read our own review of this tour here.

Delight in the decorations
The private residents of the city certainly do their bit to maintain the ambience around Halloween. The Skeleton House (6000 St. Charles Ave) is an annual favorite for its satirical decor. Ghost Manor on Magazine Street (2502 Magazine St.) also goes all out with an electronic lightshow timed to spooky tunes. The Buckner Mansion (1410 Jackson Ave.) is a hotspot as it was feature on the FX hit series, American Horror Story. A new addition this year is the Kraken House (6574 Memphis St), and a walk past the Ann Rice House (1239 First St) seems appropriate given the current reboot of Interview With the Vampire.

Haunted Houses
A selection of these are in operation this year - we detailed the best of them right here.

Family fun
Explore the French Market for live music, kid’s activities, trick-or-treating, and a Spooky Second Line at the Boo Carré Halloween Haunt. You can also take the kids to City Park for Ghosts in the Oaks, which includes trick-or-treating, arts & crafts, a pumpkin patch, and hot-dog roasting around the campfire.

Creepy cultural curiosites
A couple of seasonal performances stand out. The ghost stories and legends that shaped the city are celebrated through contemporary dance at Fantômes, presented by Mélange Dance Company, at the Marigny Opera House. There’s also Candlelight: A Haunted Evening of Halloween Classics as the Delachaise Ensemble performs a setlist of Halloween favorites at Livaudais Hall.

Halloween nightlife
Just walking around the Quarter (especially Frenchmen Street) throughout the weekend and into Monday night will be an experience. You’re likely to see locals in their full Halloween regalia, so don’t be shy about dressing up and joining in. For a detailed look at Halloween burlesque, drag and variety, we’d direct you to our sister site Up All Night: New Orleans, where the weekend’s shows will be listed in detail from tomorrow (10/27) noonish.
​
More New Orleans' culture reviews!
Copyright © 2022