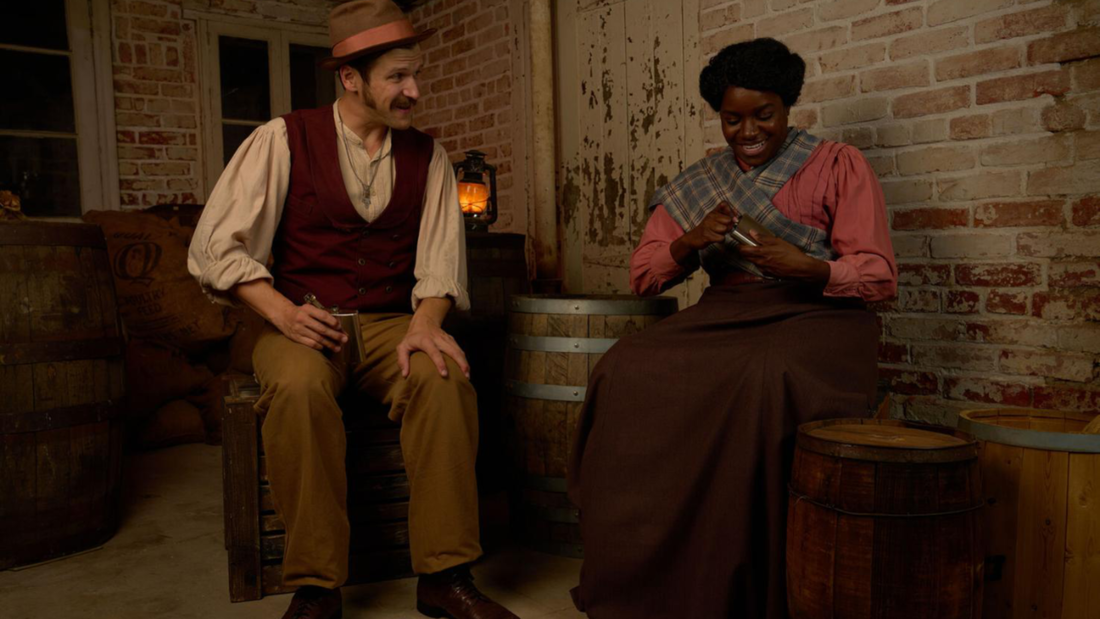 “There are many cruel men in the world, but their cruelty is drowned out by laughter.”

How excited should you be to see a play about the social and racial tensions in New Orleans during the 1892 General Strike? You might think that you’d be in for a well-meant but earnest couple of hours with some thin gruel in the way of the entertainment quotient. It’s true, the toad of oppression squats heavily on the players as they careen through lean and uncertain times. If you emerge from The Family Line feeling that it was anything less than utterly compelling and masterfully presented, though, I’ll buy you another ticket and let’s go and see it again. Out of a superficially dour scenario comes a dynamite production.

Imagine watching a prestige period drama on HBO, but in some near-future tech bubble where you control the camera angles and even which scenes you’re privy to. I don’t mean to be reductive about an artistic form (live theater) that’s been around for millenia to pander to you, but I’m trying to pull you away from binging House of the Dragon here.

Tickets are limited to give everyone space to move. As an audience, you’re dropped into a tense night as a curfew nears, thanks to violent civic unrest. Just a year earlier, a number of local Italian-Americans had been lynched, and there are any number of wealthy capitalists looking to exploit and unleash cruelty on the city’s Black and Creole citizens.

The Family Line is a site-specific, immersive production, at the evocative and historic Beauregard-Keyes House and Gardens. As the cast line up in the courtyard to signify the beginning of the play, your own active choices begin. They disperse to some of the six performance spaces (mostly rooms in the house), and you choose who to follow.

The scenes begin to unfold with family skeletons, budding love affairs, a recent death and the dilemma of whether to close a business and join the strike. Black, Creole and Italian-American families flirt, argue, wrestle with moral dilemmas, tell jokes and struggle with personal demons. The players interact in one space for a few minutes, and then carry on with their personal story arcs as they move to different rooms, larger stories slowly being pieced together.

You can latch onto a single character that you find charismatic, or you can spread yourself around, getting a more general overview. The beauty is that the play resets after 35 minutes or so, and you can take another run at things with new eyes. Some pieces of the whodunnit fall into place, you hear the punchline (or the set-up) of a joke, and characters’ choices become clearer.

The two main narrative thrusts are whether closing the business will improve the lot of people already under financial pressure, and the making sense of a murder. Threads are pulled at, moral stances are taken, and the pressures of the General Strike are addressed through engaging, personal stories.

It’s beautifully choreographed and paced, Chris Kaminstein’s script deftly blending the macro and the micro, with his and Richon May Wallace’s direction making it easy for you to curate your own experience on the fly. The house provides its own authenticity to the background, backed up by Ellen Bull’s wonderful costume design and Cassandra Erb’s thoughtful sets.

I chose to latch onto the wry and loquacious Pascal and Christine for the first take, and then after the reset, the charismatic Dez and ambitious Isaac - KC Simms I recognized and loved from his performance in the wonderful As You Like It last summer. But don’t worry, you can’t go too far wrong no matter which particular path you choose to wander along.

There are some shocking revelations, and the odds of survival seem slim at times, but the societal stresses are balanced out with optimism and an overwhelming end note of humanity. As one of the characters says, “I’ve seen enough tragedy to last a lifetime, but I’ve seen enough miracles for two.”